"Byzantine Music" is the common term for post-Byzantine liturgical chant. It is the music traditionally used in Eastern Orthodox churches, especially when hymns are chanted in Greek or Arabic. Thus it is used throughout Greece, Cyprus, and the Holy Land, as well as in Orthodox churches anywhere immigrants from these places live.

The notation used for Byzantine music is the oldest musical notation in the world still used today. This notation is uniquely tailored to express Byzantine music in a straightforward, practical manner. Because it is a descriptive notation, it may be used by beginners to chant in a simplistic way as well as by masters to chant in an elaborate way. And because it is based on relative pitches rather than absolute pitches, it is very well suited to vocal music.

The braille version of Byzantine Music notation was devised by Father Dositheos (Paraskeviades). Father Dositheos was born in Asia Minor in 1912. At the age of five, he lost his vision due to meningitis. In 1922 he joined the House of the Blind in Kallithea, Athens, where he learned braille. Since he was musically gifted and extremely bright, he also learned Western European staff notation in braille. After graduating from the School of the Blind in 1928, he devoted himself to learning Byzantine music.

At that time, however, there was no way of writing Byzantine music notation (i.e., the "New Method" of the "Three Teachers") in braille. To solve this problem, with the help of the protopsaltis Stavros Stavridis he devised the system of writing Byzantine notation in braille presented below. He then transcribed thousands of pages and many books of Byzantine music into braille using this notation. Furthermore, he also became the protopsaltis at the parish of St. Stephen in New Ionia in Athens. Afterwards, in 1931, he went to Katounakia on the Holy Mountain and became a monk, where he had the time to study the masters of Byzantine music. In 1939, he left the Holy Mountain in order to teach his system of Braille Byzantine notation to others.

While Father Dositheos was on the Holy Mountain, however, another blind chanter (Demetrios Chysaphidis) with the help of professor Constantine Papademetriou transcribed hymns of Byzantine music into European staff notation in braille and began teaching this to the blind. Since blind chanters had become acquainted with this music notation first, fifty years would pass before they would begin using the notational system of Father Dositheos. They eventually realized that staff notation has several inherent drawbacks in comparison with Byzantine notation and that it prevented them from chanting together with sighted chanters using Byzantine notation.

Father Dositheos helped establish the Association of Blind Chanters in Athens. He also wrote hundreds of pages of his own compositions of Byzantine music, which were later transcribed into standard Byzantine notation for the sighted and published in the following books:

He passed away in 1991 at the age of 79 in St. Cyprian's Monastery in Phyle near Athens.

The following image displays a chart of all the symbols of Byzantine Notation above their braille counterparts.

Click here for a detailed description of all symbols in this chart along with the rules for writing Byzantine Music notation in braille.

Conversion Chart from Neumes to Braille 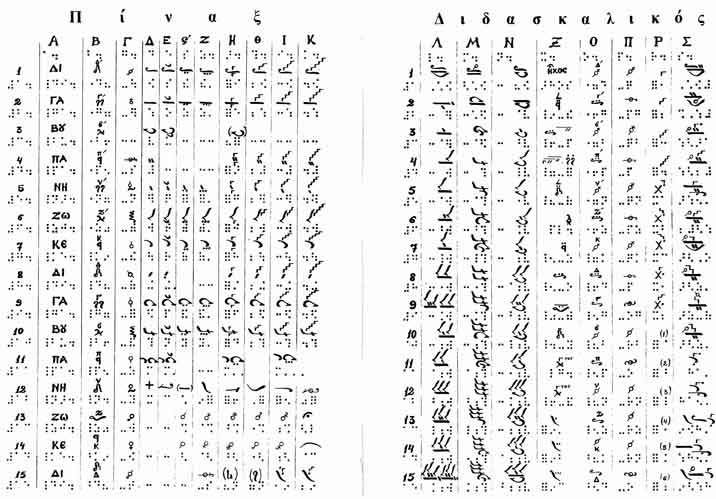 Sample of Braille Byzantine Music
(with each braille symbol translated) 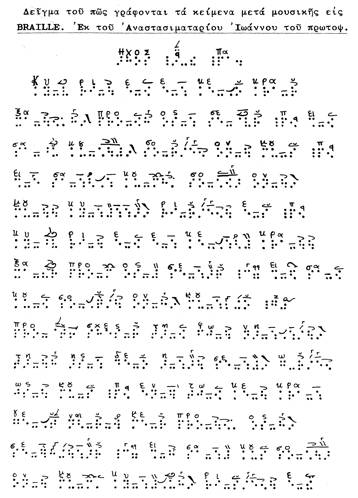 Click here to listen to a recording of this hymn in English.

To learn all the basic symbols of Braille Byzantine Music notation click here to access our online Exercise Book with audio recordings and written explanations.

The following liturgical texts and music books in braille may be downloaded for free. All files are in ASCII format and are thus ready to be embossed by most braille printers. Please contact us if you have any other files we could add to this humble collection. To see on your screen what these files will look like when embossed in braille, download the SimBraille font and change all characters in the file to that font. "Cover Graphics" are color PDF files that may be printed with an ink printer to decorate the front cover.

Greek Texts in Braille: (All these files follow Greece's national standard of Greek braille rather than International Greek braille.)

Byzantine Music in Greek in Braille: (All these files follow Greece's national standard of Greek braille rather than International Greek braille.)

The following macros are simple computer programs that can be installed in Microsoft (MS) Word to accomplish useful tasks.

Note: In some versions of MS Word, a bug in their program can suddenly make macros stop working properly. The easiest way to solve this problem is simply to close and reopen MS Word, which for some reason makes those macros functional again.

The Association of Blind Chanters (in Athens). Although their web site is not ready yet, their president (who knows English) may be reached at the following address and phone number:

Free hard copies of the Bible in braille: 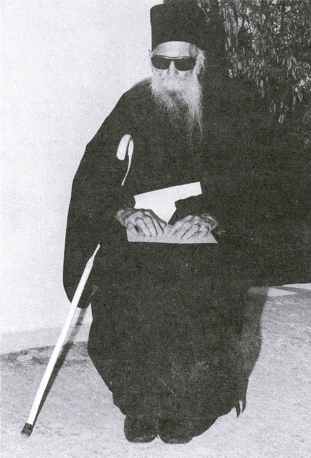 Didymus the Blind was revered by his contemporaries as the foremost Christian scholar of the fourth century and as an influential spiritual leader. He devised a system of tactile writing 1500 years before the invention of braille and had great knowledge of many subjects, including music. Although the Second and Third Ecumenical Synods condemned Origenist aspects of his speculative theology, they never condemned Didymus himself. St. Nikolai Velimirovich includes him as a saint in the Prologue on October 18th.


If you find any problems on the Divine Music Project pages, please contact us through this form.
Use left/right arrows to navigate the slideshow or swipe left/right if using a mobile device
TOP
English
English